Early Purple Orchids and other plants 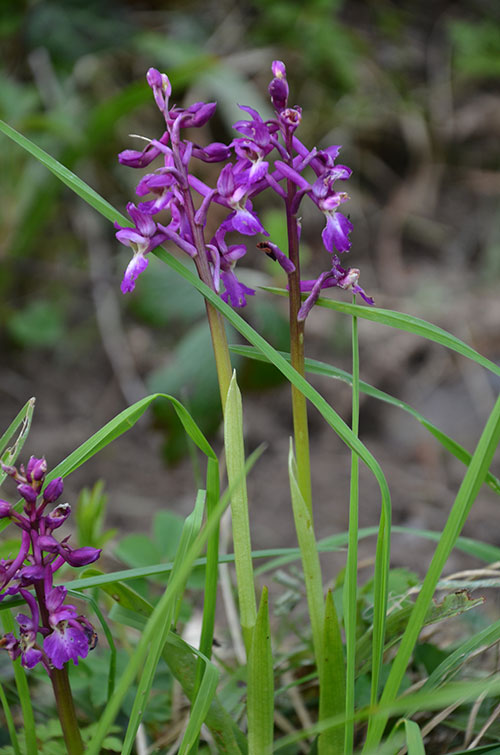 This project is not just about Early Purple Orchids (Orchis macula). It is about how to turn a green field into a woodland landscape, or a new hedge into a mature hedge. We tend to think of woods as something to do with trees, but actually the trees themselves are by far a minority in terms of species diversity in woodland. Taking a grass field and planting it up with trees will produce a woodland of sorts, but one that is grossly impoverished.

Similarly, we have planted many kilometres of hedges on the farm. We’ve used two methods over the years. The best method is to cut down an existing hedge in winter to about 30 cm, then dig the whole lot up and move it, stumps and all, to the new hedge, but spread out over 2-3 times its original length. The trees, shrubs, herbs, fungi and residual seed bank will come alive again in the spring and within a year or two you will have a hedge with a full complement of diversity, but a lot longer than before. The second way is to plant 60cm whips of mixed species such as hawthorn, blackthorn and hazel, at 30 cm intervals in staggered rows. This too is a long way off from being a species-rich ancient hedgerow.

If you wait long enough, species will colonise these woods and hedges. It may take many decades, and certain species, such as bracken, may predominate and choke the whole area first. The alternative is to introduce species and let them become established. Some species, such as blackberries, are quickly and widely dispersed by birds. But other species, such as the Early Purple Orchid, do not have a good dispersal mechanism and so in this project we are using its story as a flagship for a whole re-wilding effort. 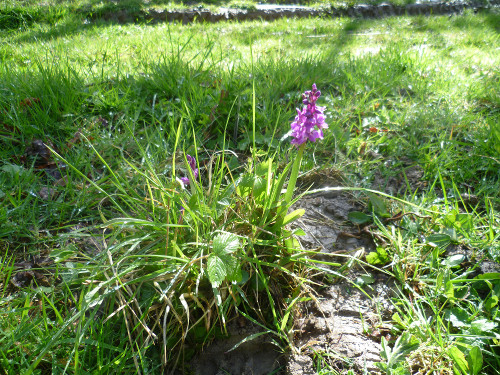 We have only one patch of Early Purple Orchids on the farm. It is in a south facing hedgerow that we have kept livestock away from for 15 years. The patch in this time has extended from about 5 metres to about 7 metres long. So in linear terms, by means of tubers, it is spreading at about 7 cm per year. But tubers can only spread through suitable habitat and are blocked by unsuitable areas, such as the thick hedge above, and the track below. The orchids can also spread through seeds and these are tiny and just fall to the ground. The protocorms need a certain fungal mycorrhiza in the soil to develop. So far we have seen no new colonies at all that could have originated from seed. 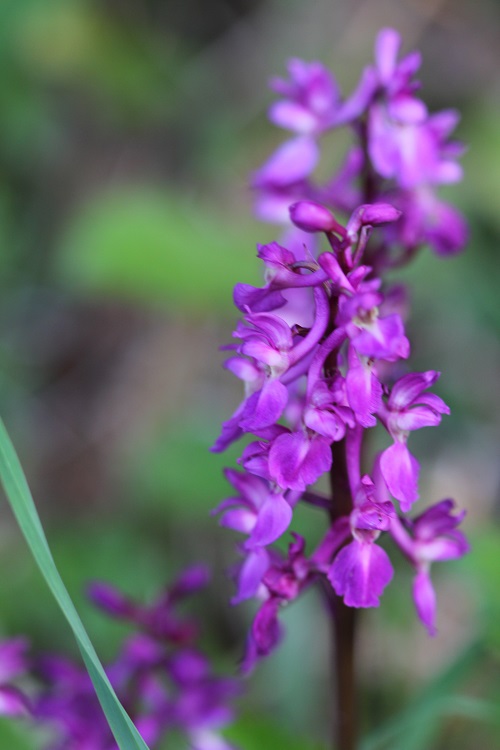 Our new hedgerows and woods on the farm are mainly in ‘clean’ fields and some are more than a kilometre away from the orchid bank. Even if there was suitable habitat all the way – which there isn’t – it would take the orchids 1400 years to reach the new habitat areas. So sitting and waiting for natural colonisation is not really an option. And of course the orchid is just a flagship; there are many other species in the same predicament.

So we have taken chunks of turf containing some of these species and put them in the new habitats around the farm. In each turf may be several plant species, not to mention fungi, and also residual seeds waiting for an opportunity to germinate. In this way we have established tiny new focal colonies of species, such as the native bluebells, primulas and daffodils, as well as the less flamboyant species such as wild Garlic, Celandine, Herb Robert and wild strawberries. Around the ponds we have Water Cress, Water Mint, Marsh Marigold, and various species of reeds. With each plant or clump goes a big chunk of earth or mud containing a whole host of organisms. As the years go by, and ponds and hedges have matured, we have been able to harvest these again for further areas of new habitat. Often, by dividing bulbs and corms, the plants that are left behind respond vigorously and are ready again for further harvesting in a couple of years.

So in a way we are ‘farming’ wildlife, looking after ‘breeding stock’, harvesting it and planting it out to form a new ‘crop’. The casual visitor will not notice anything unusual, but for us, remembering what was just an area of ryegrass a few years before, we see the steady progression as each little area becomes a diverse community of species which will create further habitats for the next trophic levels, such as insects, to colonise.

This project raises a number of legal and ethical questions. Digging up many species of wild plants is illegal. This legislation is intended to protect them from plant hunters who will take them away and sell them. But the same legislation unintentionally impacts anyone attempting to manage them. Whole rafts of legislation, aimed at protection, adversely affect management efforts. And yet so much can be done to help wildlife, a little here, a little there, if only legislators understood management. It is a question of taking a positive approach, rather than a negative one.

From the ethical point of view, our aim in The Bevis Trust is to return as much of the farm as is compatible with modern agriculture into its full potential range of species diversity and abundance. To do that, we are prepared to ‘manage’ the wildlife areas, just as we do the farmed areas, to maximise productivity. This is active re-wilding from the bottom up. Other re-wilders think that re-wilding should be a process whereby man steps back and an area is allowed to ‘go wild’, to do its own thing. From our perspective, we cannot wait 1400 years for the orchids to spread across the farm, and currently there is a risk that our little isolated colony could easily be wiped out altogether. Many species simply cannot re-colonise under their own steam. Beavers for example will not swim across the Channel.

Other re-wilders, think that re-wilding should be on a major landscape scale. That’s fine if you control a big area. But our farm is only 290 acres and we have to think what species can thrive on this landscape scale. Top predators require far bigger areas than this just for one pair, let alone a minimum viable population. The farm could probably support two wild pairs of beavers. To create a minimum viable population would require a far bigger area, and this is why our beaver project encompasses 60 km of river.

Other re-wilders talk about trophic cascades and introducing top predators such as wolves. Trophic cascades can only work when all the trophic levels below are there and functioning. When major species groups are absent, trophic cascades cannot happen. In our case it is a question of re-wilding from the bottom up, starting with the very bottom trophic levels, such as bacteria, fungi and lower plants, then building functional plant communities which can then support insects, amphibians, reptiles, birds and mammals. We have to walk before we can run.