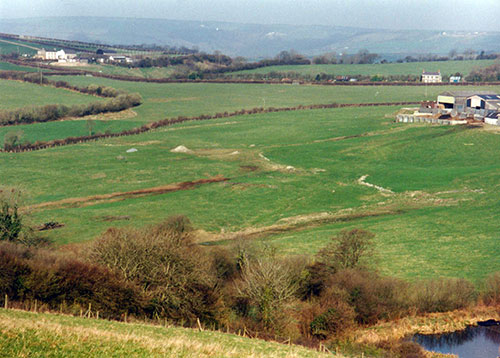 Twenty years ago we bought the next door farm. Once a 90 acre dairy farm, it was now used for dry cattle and sheep. One of the meadows at the bottom of the farm was very boggy. It was dotted with springs and covered in rushes, not good enough for intensive grazing and not wet enough or flat enough to be a wetland. Medieval farmers had tried to drain it with stone slab drains. Victorian farmers had tried clay pipe drains and a modern farmer had tried plastic land-drains. All had failed.

We decided, instead of fighting nature, to make it into a lake. After months of inspections and licence applications, we finally got the go-ahead. We dug some test holes to see what the ground was like. In places it was shale, very porous and steep. In other places were beds of grey clay, two metres deep. It was clear that we had plenty of clay, if only we could manage it for building the 350 metre dam which need to be 12 metres high in places. 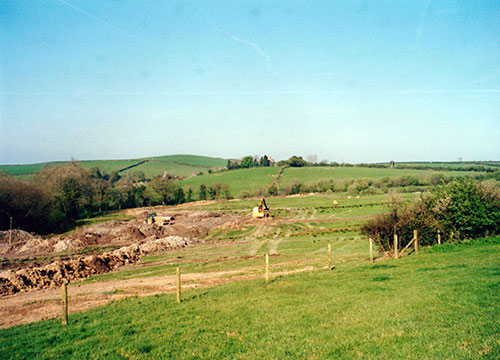 The first task was to strip off the topsoil down to a good solid base to key the dam in. At the same time we had to dig trenches to manage water seeping from the various springs. Clay is a great friend, but a bad enemy. You can only work with it when it is in the right consistency. The dam had to be built up in layers of firm but moist clay, 15 cm at a time and thoroughly tracked in and compacted. In the reality with the dam 30-50 metres wide at the base, and given Welsh weather and the availability of contractors, this took us three years. Somehow whenever the clay was right, everyone was busy on the silage!

A lot of digger drivers have worked for the Council. They love straight lines. We had to teach them to avoid all straight lines and make all the edges curve, and to make the bottom varying in depth, with some areas of the lake being at least 7 metres deep to retain cool oxygenated water. 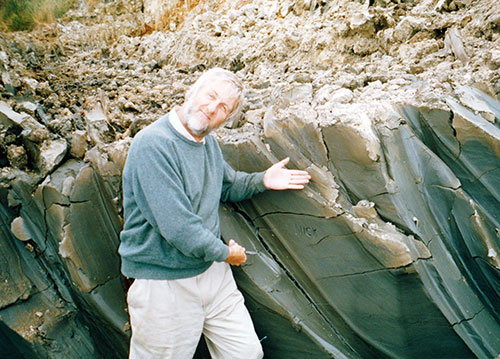 We had to move about 50 metres of old hedgerow. Rather than destroy it, we first trimmed it down almost to ground level, then lifted it, load by load, to a new position above the lake and stretched it to make a new hedgebank 100 metres long. All the plants and residual seedbed came through the next season and very soon you would not have known that hedge had not been there for centuries.

All the clay from the lake had to be dug out and taken to the dam. As we dug into the clay we found a band of what looked like burnt black ashes. When we examined it more closely we could see it was forest from the interglacial period that had been compressed almost to a coal. Meanwhile the top soil was stock-piled and then at the end we spread it all over the bed of the lake, leaving it very rough to form a substrate for water plants.

The day finally came when we could insert the overflow pipe and lay bets on how long it would take to fill. After three years of a lunar landscape it was a delight to see the lake form before our eyes. 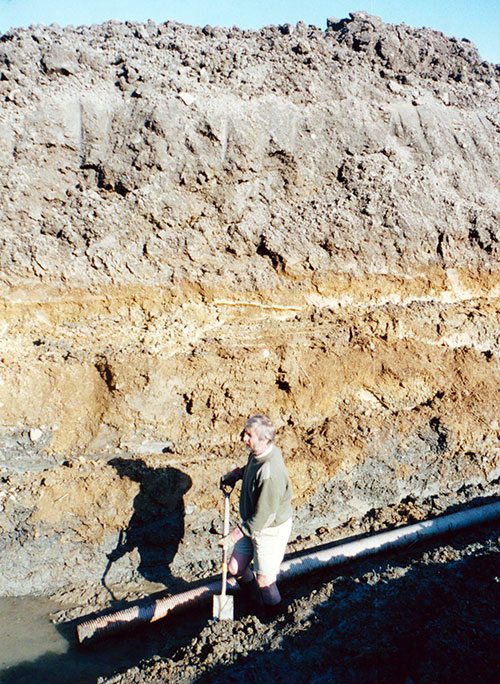 The next step was to plant up the banks and all raw areas. We transplanted reeds, reedmace, water cress and a big range of other water fringe plants from our other ponds. Also many buckets of pond ‘gunge’ dredged up from our other ponds and full of invertebrates and seeds. Dozens of green willow rods were pushed in to grow into trees. Year by year the lake settled comfortably into the landscape and developed its own flora and fauna.

We got a fish licence and stocked with a mixture of brown trout and triploid rainbow trout. This was a decision we later regretted. Triploid trout cannot breed so were not self-sustaining. Meanwhile an otter came and played havoc. One summer at silage time some gulls were bathing on the lake and I saw an otter come up underneath one of them and pull it down, like ‘Jaws’. Since then, no more skinny dipping for me! And a neighbour managed to poach out the rest by setting night-lines. Now we would like to re-stock using brown trout but apparently this is no longer allowed. So establishing a balanced representative population of indigenous fish is not easy.

Two years ago we stocked the lake and surrounding wetlands with water-voles. These have flourished well. Unfortunately a neighbour who runs a shoot decided to release hundreds of tame mallard that settled on the lake and thrashed the vegetation, exposing many of the vole holes. So it remains to be seen if the population will recover. We also used to have mink but we have seen less of them since the otters recovered and although we set cage traps when we released the water voles we only caught a solitary polecat (released unharmed). 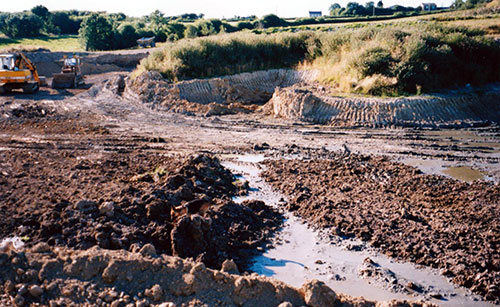 Gradually the water birds built up. For a few years while the big cliff was still raw we had sand-martins, and now we have kingfishers visiting. Canada geese soon moved in and while we are happy to have a few, we have had to thin them out to stop their numbers exploding. The greylag geese are more welcome. They are more low key and often nest well away from the lake. One pair nest on a pond at the far end of the farm, and walk their goslings all the way to the lake, over a mile away. The moorhens have built up their numbers and are always busy and the dabchicks, which are very shy, nest in the willow branches hanging in the water. They cover their eggs with weed and sink down until only their eyes and beak are showing. They can stay like that for half an hour at a time. They carry their tiny chicks on their backs and are a delight. In April the first ranks of swallows flit around the lake, re-fuelling on their way further north, and then our own swallows and house martens bring down their broods to fatten up before heading off to Africa. 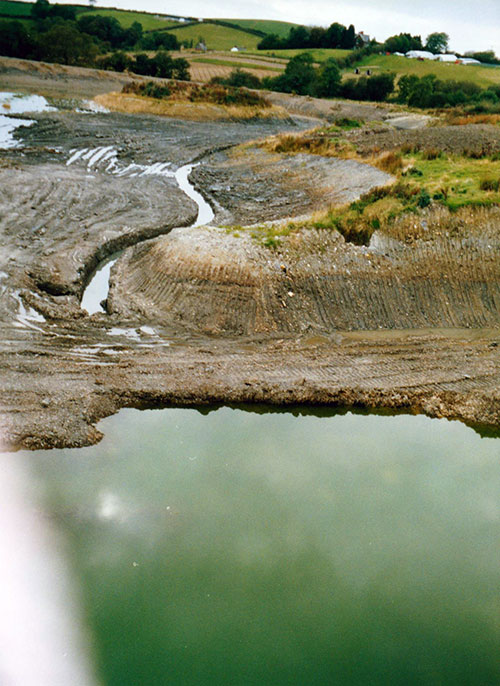 Dragonflies and all sorts of other insects have built up their numbers. They climb up reeds and leave their exoskeletons before pumping up their wings and sallying out across the water. Bit by bit and year by year the lake has matured. Buzzards and goshawks pick off helpless young birds and eventually we found that none survived. Every day a duckling or gosling would be missing. Otters and foxes come up from the stream below to raid the broods before they can scurry into the water.

In 2015 we put up a 700 metre fence all along below the dam and put in a pair of beavers. Miraculously the foxes and otters could no longer sneak up and about 32 goslings fledged, as well as many moorhens and some ducks. Meanwhile the beavers settled down and in the winter built themselves a lodge. They have cut down many willows which have fallen into the water and softened the bank. Already the waterbirds are nesting in the overhanging branches and the water shrews skitter about too quickly to focus field glasses on. Now we feel our lake is complete. Over 16 years we have gone from a rough field to 10 acres of woodland, lake and willow wetlands. It is a minor loss of productive farmland and a major gain of wildlife habitat.