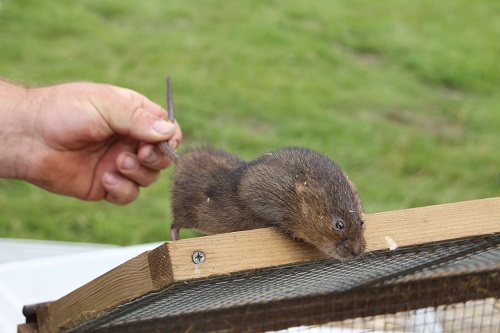 We had Water Voles here on the farm until about 30 years ago when the introduced feral American Mink peaked in numbers and Otters were at an all-time low. The hard clay river banks are still riddled with Water Vole holes and tunnels but currently they are all empty. Unlike Otters, Mink, especially the females, are small enough to go through the Water Vole tunnels.

As Otters started to recover, for some unknown reason, Mink numbers have fallen and we have not seen them here much over the past ten years or so. We do of course have our native Polecats, but these are at low densities, cannot easily squeeze down a Water Vole tunnel, and are not keen on swimming. We have very few Stoats and Weasels. We have also dug a lot of ponds over the last twenty years, with associated reed beds and wetlands.

So it seemed that the time was right to try to bring back Water Voles and in summer 2014 Derek Gow Consultancy www.watervoles.com released 95 captive bred Water Voles around the lake and adjacent ponds. We kept them in water-side cages for a few days to acclimatise, and being high summer, the vegetation was very lush and they must have thought they had gone to Water Vole heaven! Water Voles are quite territorial and they quickly sorted themselves out and staked their claims to prime habitat.

Now, in 2017, all our ponds at the top end of the farm, which are connected by streams or by habitat, have resident Water Voles, and we can safely say that the species is back. We have been planting phragmites reeds around some of our newer ponds nearer the river and we hope that it is only a matter of time before the Water Voles venture out further and re-colonise their old tunnels. 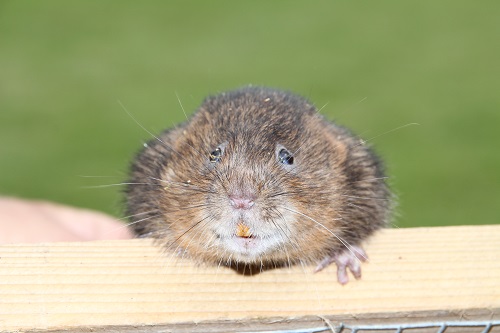 On a world scale, the Water Vole is doing OK, but numbers in UK crashed and so did their geographical range. This has meant that now they are heavily protected, but like all things, it is a question of balance. When the Somerset levels flooded recently, it was decided to spend £6m dredging some of the channels. Some of these had Water Voles, so the Environment Agency spent £86,000 doing a wildlife survey, trapped 55 Water Voles, spent another £24,000 keeping them in captivity over winter, and in total spent £135,000. This represents £2,454 per vole. This is a gross misuse of funds and shows a mismatch of priorities.

You can breed a Water Vole in captivity for just a few pounds and this amount of money could have supported about 100 reintroduction projects. http://www.bbc.co.uk/news/uk-england-somerset-32127454 . A whole new industry has been built up surrounding conservation of mammals. The leader of the Somerset project claimed the work required professional, academically trained people ‘who hold relevant licences. They are undertaking sometimes long arduous hours in the field to make sure it is up to the standard required nowadays.’ Sometimes we need to just take a step back, look at the wider perspective and do a cost-benefit analysis. If channels are being severely dredged so that the bankside habitat is effectively being destroyed, it is better just to get on with it, wait a couple of years for the habitat to recover and then re-stock with Water Voles at very little expense. 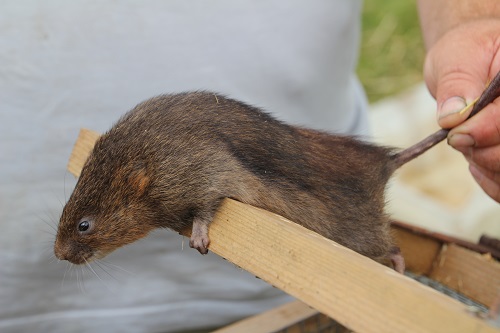 Water Voles are simple creatures; you can find out all about them on the internet. Our Beavers on the farm make small ponds and the Water Voles have been quick to colonise them. Water Voles are most active in the daytime, whereas the Beavers emerge at twilight and are busy all night. Sometimes visitors who are in the hide, eager to spot their first Beaver, see a Water Vole and in their fevered imagination it becomes a ‘Beaver’. But although they look very similar, a Beaver is ten times bigger, and instead of the dibbly little ripples that a Water Vole makes, the Beavers make an unmistakable big body wave that carries a long way.