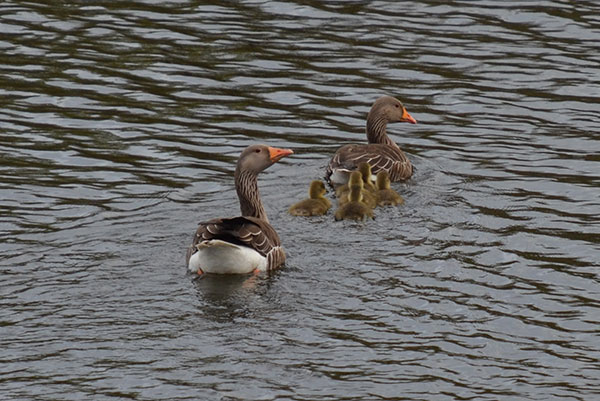 We have seen a good increase in bird numbers and diversity as the habitats have improved. We have put up ‘starter packs’ for swallows and house martins, just a ‘U’ of mesh to enable their nests to hold securely in summer storms. They accept these, and also we have designed the new buildings with good big overhanging eves which the swallows love. The new stone walls also have hollows for nesting birds and these are popular with the sparrows and blue tits. A shaggy turf roof makes a nice tunnel nest for pied wagtails, safe away from cats. Ring barking unwanted alder trees allows them to die standing, providing food and nest holes for wood peckers. We mesh over chimneys to keep the jackdaws out but give them alternative boxes which they use. They roost in the new plantations. We used to have two rookeries on the farm but these have gone. We are not sure why, but wonder about the use of ivermectin wormers in cattle locally. Ravens nest here, as do buzzards and sparrowhawks. Goshawks and kites travel in whenever there is food around. Our damp gullies with bracken and fallen willow attract woodcock in the winter, and sometime a stray water rail. The rough meadows hold voles which attract the barn owls. They never seem to flourish for long. Recently we found one dead in the meadow, after a storm. Sometimes as dusk draws in, you can have a conversation with the tawny owls, and if you are convincing enough you will see the soft silhouette moving closer from tree to tree to check you out. A hundred years ago, we had corncrakes. We have been in contact with groups working on corncrakes but at the moment the administrative burden seems too great to bring corncrakes back here.

As part of the Red Kite Recovery Programme we hatched 55 red kites here 1987-2001 and returned them to sites in Wales and England and the species has increased year on year since then.

By 2001 the Red kite was producing from tourism in Wales alone a revenue of £3 million and created 114 full-time equivalent jobs (Raymont and Dickie, 2001. Conservation works for local economies in the UK. RSPB, Sandy, Beds, UK).  Now we have kites on the farm all the time: the most we have counted in the sky at once is 40.

Water birds. The lake and ponds have enabled water birds to adopt the farm. The Canada geese are a bit of a pest but we don’t mind a few and they are very good parents. Sometimes we harvest some flappers in late July to stop their numbers escalating. The greylag geese are much more shy and secretive nesters. One pair always nest on a little island in a pond down by the river. When they hatch they lead the goslings all the way across the farm – about 1.5km to the lake. Some years most make it, other years there are sad parents swimming bereft on the lake. The dabchicks used to visit just for the summer to breed. As the habitat has improved they now stay through the winter. They nest in willow branches half in the water and cover their eggs with weed. When you come near they slip off the nest and sink, just eyes and beak above the surface, completely motionless, watching you for as long as you stay.  Later, if you are very quiet, you might see the tiny head of a chick wriggle out on its mother’s back as she swims along. Sandpipers stop by occasionally to search the shoreline and once we found a dead Manx Shearwater, lost after a winter storm.