By The Bevis Trust In Animal Welfare, Conservation, Farming and Wildlife | June 15, 2020

Some years ago we were contacted by the Cistercian monks who own 600 acre Caldey Island off the Welsh coast. Once farmed, it was now falling into desuetude and the few monks still there were getting elderly.

We first arranged to rid the island of Brown Rats (Rattus norvegicus) by systematic poisoning over two winters using pest control contractors. Then, through the kind offices of David Mills at the British Wildlife Centre, we introduced three captive-bred Red Squirrels (Sciurus vulgaris) in 2016 and 12 in 2017. This native British species has been decimated by competition with the introduced Grey squirrel (S. carolinensis), and by disease. By putting the red squirrels onto an island, the whole population is essentially in perpetual quarantine and away from grey squirrels. There are only about 60 acres of mature woodland on the island but the squirrels use the feeders and act as ambassadors to teach visitors about the dire straits of the species. The squirrels are being fed hazelnuts, peanuts, sunflower seeds, cuttlefish and calciworms via 25 feeders (with the first year’s feed sponsored by Tenby Lions). The feeders are topped up twice weekly, though in addition there are a variety of natural foods for the squirrels to forage in the woodland areas.

New areas of native trees have been planted to provide more food for the squirrels in the future including a variety of nut producers, such as hazelnuts and walnuts.

By 2020 the population reached about 60 and it will be interesting to see how the colony stabilises.
Meanwhile, with rats gone, the seabirds, once confined to the precarious massive cliffs, are beginning to nest on the open grazed areas above the cliffs. A handful of Atlantic Puffins (Fratercula arctica) have returned and maybe one day Manx Shearwaters (Puffinus puffinus) will take up residence again. The old fields are probably the best place for Skylarks (Alauda arvensis) in the whole of Pembrokeshire. 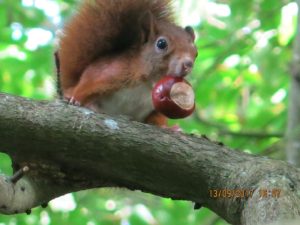 Other species such as hedgehogs will also thrive without the presence of rats.
We are indebted to Simon Walters of West Wales Wildlife & Pest Control, (westwalespestcontrol.co.uk) and his keen team for all their work in ensuring that Caldey is now 100% rat-free.

Red Squirrels:
Three red squirrels arrived on the island in 2016 after an extensive programme of rat eradication, and then a further 12 were added in 2017. The island is following a greatly-researched, closely-monitored and supplemented conservation programme, where the health and happiness of the squirrels is paramount.

The aim is for the reds to live in natural habitat with no competition from grey squirrels, which is a rare thing in the UK. The squirrels’ welfare is continually assessed, and so far they are enjoying their surroundings, building dreys, finding food, exploring the island, and raising young.

We were delighted to have spotted numerous kits during 2018 and 2019 and they are now an increasingly common sight over all areas of the island where there are trees. Although we can’t be sure of their exact numbers it’s estimated there are well over 60+.

The introduction was made possible with the expertise and advice of wildlife expert Dr. Nick Fox of International Wildlife Consultants near St. Clears. We are also very grateful to Tenby Lions, and to Simon Hart, MP.