By The Bevis Trust In Countryside, Farming and Wildlife, Uncategorized | December 16, 2016

We have been very busy down at Ricketts Mill. The plan is to turn the old trout farm into a focal point for the Trust’s activities where students and land managers can come to get first-hand experience of management techniques. The existing lake was built for trout fishing and drops sheer at the banks to about 10 feet deep. So our initial task is to pull back the banks to create areas of shallow water and reed beds. Steve Reed has been busy with the digger sorting out the area in line with the plans from the planning permission. Because the area is a flood plain we have to be careful that water from the river is still able to enter and flood the whole area, and then drain away. The reed beds will help this process because they act like a sponge, first accepting the water but then releasing it again slowly, reducing flash flooding down river. The previous owner had triploid rainbow trout in the lake with grids to stop them escaping during floods. We are keeping the grid system but getting rid of the rainbow trout in favour of brown trout and indigenous aquatic species.

So now we have large areas of bare earth and mud. We could just leave these and see what comes. If we do this we know that we will get docks, brambles and Himalayan Balsam. So our next task is to transplant phragmites reeds and other water edge plants, from some of our ponds up on the farm. These have to be raked up, bagged, transported and then planted out like a hair transplant. There is a limit to how much we can harvest because we don’t want to upset our Water Voles, so we may have to source some from friends with spare reeds. Meanwhile a Cattle Egret has already been in checking it out, and some snipe. Back from the water edges we will do some patch planting of wild flower meadows and a lot of tree planting, mainly aspen and willow. Only once these trees have sufficient biomass will the area be ready for beavers.

The electricity engineer inspected yesterday and we have agreed a route across the site to put all the overhead wires underground. This will reduce the risk of bird strikes. We hope to get this done in mid January and we have to dig the trench ourselves, 75 cm deep.

Graham has removed the old wire netting fence along the river and we have taken down some of the falling over trees, mainly willows. They are cut up and replanted on site to start new trees. The main perimeter fence will go up later on and we hope it will be good enough to stop mink and foxes, so that we can work on Water Voles, amphibians and reptiles.

Along the road some of the hedge banks were non-existent and in places the road was subsiding. Steve has built up earth hedge banks and packed the tops of them with the soil from the old hedge. This contains all the seed bed, bulbs and seedlings which will start the re-colonisation process. We will replant these hedge banks this weekend with mainly hawthorn, blackthorn, hazel and other local species. In a year or two you will hardly know they are new.

There were some big old oak trees over hanging the car park where the mill used to be. Sadly some of these were dangerous and Frank and Pete have taken them down. This has let in a lot more light. Frank is our ‘tree monkey’ and climbs right out into the outer branches to take them down section by section. Scary stuff! We have also been clearing along the old mill leat and Frank has more leaning trees to take down along there. Many have already fallen across the leat, pulling up massive root plates. Eventually we will get them clear and haul out the timber and mill it into beams and planks. That will leave an attractive walkway up along the river and later we will establish more reed beds which we hope can outcompete the rampant Himalayan Balsam. 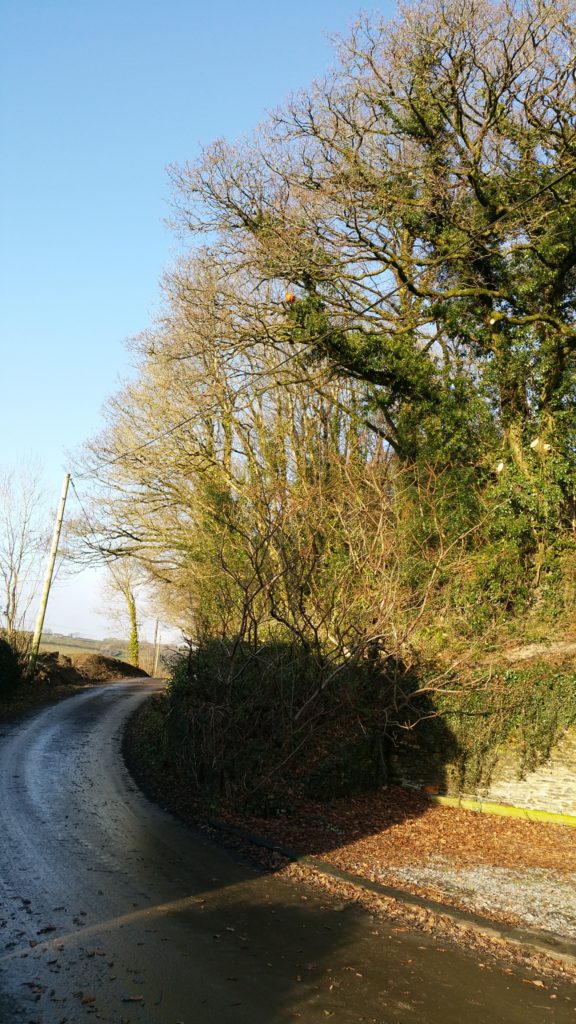 Meanwhile up on the farm I checked out the beavers in the new enclosure at Skinny Dipping pond. They have settled in now and are not going near the fence. A couple of weeks ago, in the cold weather, all the beavers on the farm were very active, even coming out in daylight. They were busy collecting and stashing willow in the bottoms of their ponds. But now they all seem quieter and although I waited for an hour after dark, nobody emerged. Instead, in the thermal imaging scope, I could see the warmth from the beavers lighting up their lodge like a glowing campfire. A cosy family scene. I almost expected to see a stick with a Christmas stocking hanging on it!  Along the fringes were three wary teal, and in the muddy clearings the beavers had made, a snipe or woodcock was busy probing for worms. I crept quietly away, watched by a fox up on the hill.