By The Bevis Trust In Countryside, Farming and Wildlife | July 11, 2016

This is a time of year full of hope, tinged with sadness. All the young animals are leaving their nests and burrows, but they are so vulnerable, and many don’t make it. Evolution has planned ahead and compensated by creating bigger broods, but even so the attrition rate can be horrendous.

There have been lots of baby rabbits hopping around naively these last couple of months. We see them here and there, on the lawns, along the hedgerows. But how many three quarter grown rabbits are there? Very few. As fast as the rabbits breed, the predators mop them up. Animal populations follow a massive annual saw tooth graph. They have a big spike in the summer which tails off over the autumn as most of the young ones don’t make it. The predators have a similar graph, but a month or two behind the prey species. Their young ones also die off, this time often from starvation as they fail to become good hunters. By winter, resources are getting scarce and all plants and trophic levels are at a low ebb. By spring, first the plants perk up, then the insects, then the species that feed on plants and insects, then the predators. We saw a peregrine site near Tregaron last week and the chicks were still only half fledged. But now there are some easy pickings for the parents catching prey for their hungry young.

There was a baby blackbird in Blaencwm yard yesterday, still too young to fly properly. The moorhens at the top pond have only one gawky youngster from their first attempt, but now have several fluffy black youngsters in their second brood. But in this foul weather, how many will there be next week? Down at the lake it looks like two pairs of dabchicks have got broods well on, which is a record. For their size and unobtrusiveness when humans are around, they can be very territorial with one another with little heroic dramas going on when nobody is around. The first brood of greylags have flown away but the other family is still here. We have far too many Canada geese which have eaten out about an acre of grass by the lake. Drew has shot a couple of youngsters so far but he will have to thin them out big time next week otherwise we will be overwhelmed with them next year.

The mallard that derive from farmed stock do not breed well, nor do the pheasants. We see eggs or new chicks, but they die off in days. The wild ducks have reared young on Skinny Dipping pond, and another few down at the Goose pond by the river. Sadly one of the dogs caught a duckling while I was on the tractor topping bracken on the banks. Uncontrolled dogs and cats take a big toll on wildlife, and while the government are keen to open access to the countryside for humans, this becomes even more pressure on the wildlife.

We have had our own dramas. The young falcons are starting to fly now. The earliest are now ‘hard-penned’ and are starting to fly loose for their first faltering flights. A young New Zealand falcon, still very fat, got a bit boggle-eyed on her first few flights and didn’t want to come down. I had to stay with her until dark in case a predator got her. A buzzard came and hung in the updraft of the hedge she was in, focused, then dropped a little, then dived. Had it caught the falcon? After a few moments it rose up again with prey in its feet. It looked like a young rabbit, and the falcon was still safe a few metres away. At daybreak the hill was in thick cloud and driving drizzle. The young falcon was sopping wet and very sorry for herself. She hid in a hedge but did not really know how to find shelter. Although she would come down to a lure, she would not let me approach her to pick her up. By 10 am her trainer arrived, and this time she allowed him to pick her up and we all went home with a sigh of relief, ready for a hot cuppa and a change of clothes. In a few more days the same falcon will be carving up the sky, riding the wind, in her element. 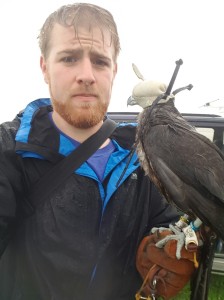 A soggy Tom and falcon

The weather has been wet all through June and July so far. Thank God we don’t make hay any more but even silage is a gamble. Drew has had the ewes and lambs in for dosing. Wet warm weather is a trigger for flystrike, with maggots hatching in the wool. So we keep a close eye open for any sheep with twitching tails. The beavers meanwhile continue to flummox us. Whereas the top pair have had their kits out for some time now, the lake pair have been bringing food into the lodge for about 9 weeks, but still no sign of the kits. What can conditions be like inside a burrow for two months, with continual deliveries of wet leaves? What about aspergillosis? And what about carbon dioxide levels? It goes all against my instincts for fresh air and sunshine!

The bats in the log cabin get better air. They crawl into crevices inside the roof. I saw a spattering of bat urine and droppings on the floor and looked up to vertically above it for a bat. There hung a hand towel from a hook on a beam. The bats must be using it as an easy place to hang onto and land. Maybe it is the young bats making their first independent landings?