By The Bevis Trust In Countryside, Farming and Wildlife, Native Species, Rewilding | April 10, 2017

I’ve just returned from New Zealand where there has been a major crisis in wildlife management ever since mammalian predators were introduced in Victorian times. Rats, stoats, weasels, ferrets, cats, hedgehogs, possums, rabbits, hares, pigs, goats and deer all either predate native wildlife or wreck the habitat. Efforts have been made to control their numbers, particularly the brush-tailed possum introduced from Australia for its fur. It is the main vector for bovine Tb and New Zealand takes a much more robust no-nonsense approach to this. In steep heavy bush country, the controversial poison 1080 is dropped by plane, and systematic poisoned baits are laid on plastic bait stations on tree trunks. It is an ongoing battle that can never be won, but having said that, bTb has been significantly reduced to just a few areas now, and there are plans to completely eradicate it both from cattle and the vectors by 2050. UK on the other hand blows hot and cold on the Tb issue; it is increasing all the time, causing huge costs both financial and emotional to farmers as well as suffering amongst the badgers. The political vacillating has resulted in farmers just taking the law into their own hands from sheer frustration. 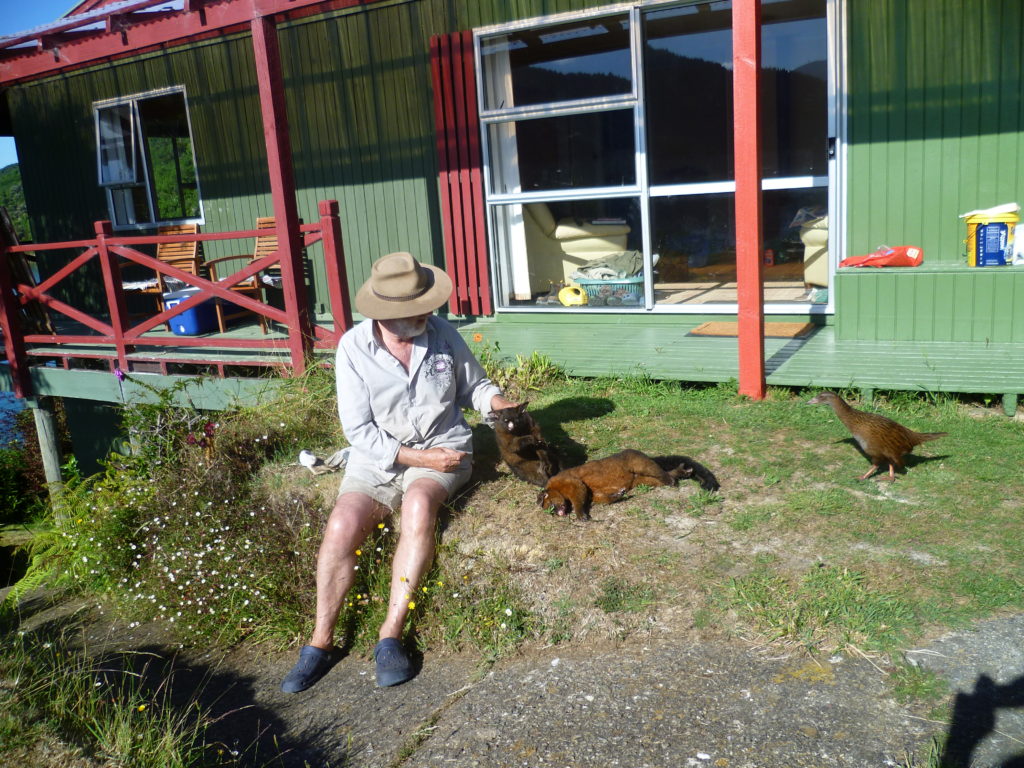 I am a Patron of Picton Dawn Chorus, a community group aimed at reducing the introduced predators around Picton in the South Island. A predator-proof fence has been constructed cutting off Kaipupu Point, creating a haven for wildlife and now kiwis have been re-introduced. PDC’s objective is to create a low predator buffer zone around this core area so that native birds can overspill and create at least minimum viable populations long term. The group makes and supplies traps to people of all ages and we try to have at least one rat trap every 50 metres in a grid across all areas of town and surrounding bush. A similar project has been run in Wellington, with good results, but there is no end to the battle. Retired folk, mums and school children are all soldiers in our army.

Kaipupu has been an inspiration to the Bevis Trust and we hope to start work on the predator fence as soon as the ground dries up. It will enclose about 9 acres of river flats and all the ponds. Meanwhile we have been taking down overhanging branches and removing all sorts of rusty wire fencing that is visible when the leaves are off. It is a race against time, this sunny weekend is warming the ground and the vegetation is coming alive again. Everything is budding and leaves are unfurling. Another couple of weeks and the landscape will be totally changed.